In their most desperate hour, they prayed for you to save them from the doom. You created a way out, but they must sacrifice before they can truly be saved.

Your only way to cause reverence is destruction and suffering. Once people believe in you, they sacrifice out of free will. To save everyone, you have to gain strength and devour people. The mortals do not understand why you eat them. They will lose reverence, but it is the only way.

Sorry this time I couldn't make time to join, so I can't rate your game in LD.

I think the introduction could be improved, it took me quite a while to understand how it works. Especially the devour mechanic, since there's no indication of how "fat" you've become.

There was also some bug with the devour, when you hold the down key and you get stuck in an infinite devour state. Also, in my "clear" run, the doom wall kind of got stuck at -99m (was it a bug?). In other runs, the doom wall always progress regardless of how "fast" the wagon run. There was no indication of "speed" change when the number of pullers change.

I think it would be best to see your wagon dynamically outrun the impending doom wall briefly when you have a lot of pulling force (like when you have 6 pulling abominations), and only barely keep pace when you have 4 or 5.

Hi! Thank you so much for the feedback, i missed you in the jam. I can confirm the bugs ;)

The introduction also was a bit of a headache to me. Can you tell exactly what you did and expected? Did you know you have to go left first? Did you pick up the available corpses, then go left to start the wagon, or did you play around with the villagers first?

Regarding the doom - voth wagon and doom should be on the move, but you should be able to outrun it for a short while. There is some rubber banding in place, because it is no fun if you can outrun it safely. It will surely need some tweaking, so your feedback is very valuable - you know how it is, having programmed it, it is difficult to balance too.

Most importantly there was an UI bug with the menu, on my screen it looks like this: 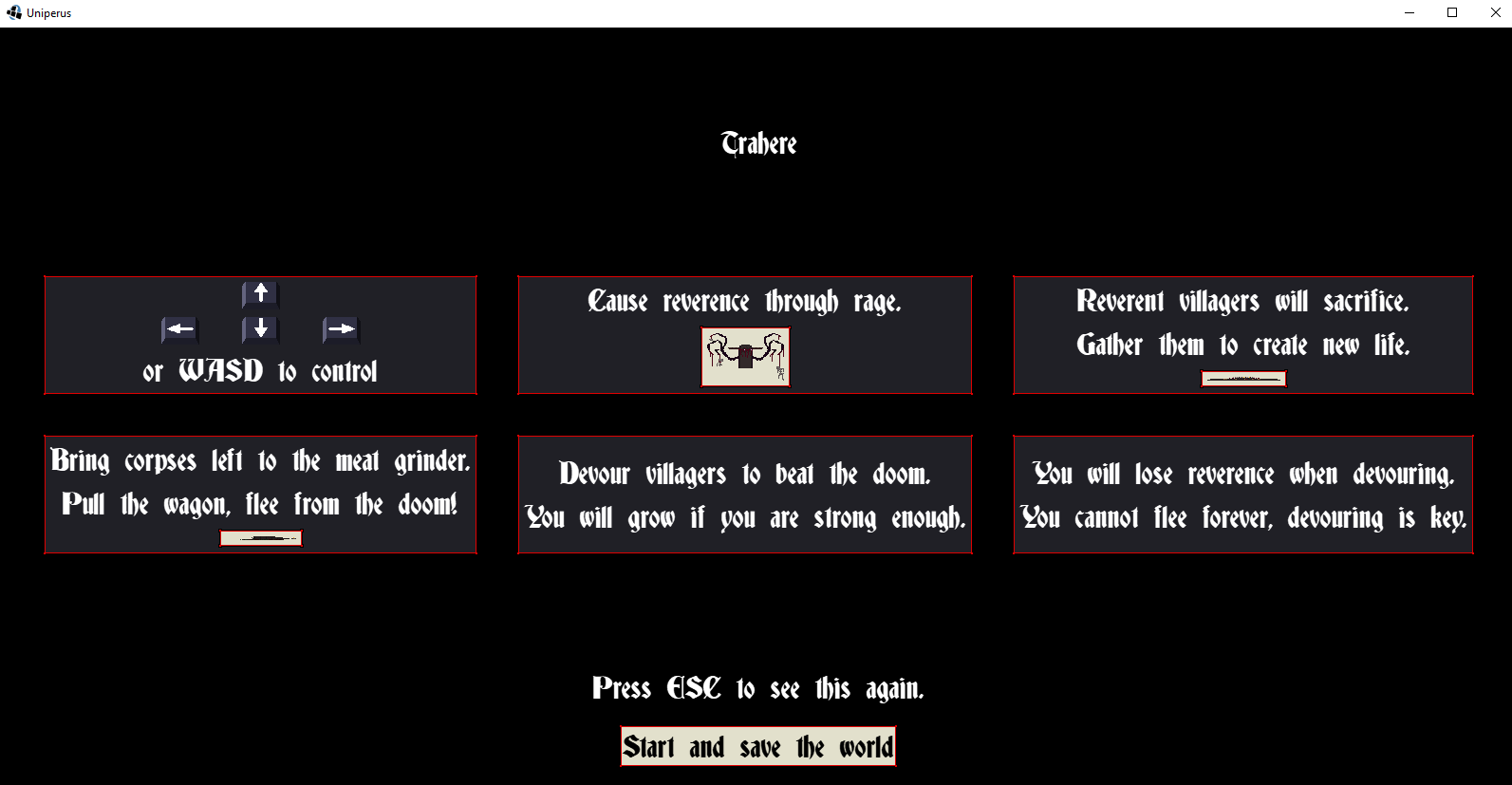 Secondly this summary is reversed compare to the game:

- 1st part WASD: who need this? Could be an indicator in game at the start.

- Rage introduced is second. But in game you can't rage immediately until later. Lead to confusion.

- 4th part bring corpse to wagon: where the heck is wagon? I'm already "left" (compare to the start). It takes time to read and understand this part, better have an arrow in game.

- General arrangement need improvement. 6 panels are not grouped. Because of the line break, the wagon panel and the gather corpse one doesn't have a relationship.

- This popup is too long. When I'm reading this at the beginning I didn't know anything about the game, I'm expecting to get into the game as quick as possible. This panel should only cover important part "how to win" part that are hard to figure out in-game.

The font cause me to skip the ESC part completely, didn't know until I press escape trying to replay.

1. Meat grinder part was a bit confusing but after reading 2nd time I got it.

2. Rage is not clear (still not clear now how it works). It doesn't have immediate effect on the villager. I didn't notice the totem height until a bit later. Even then because of its relationship with other mechanic I still don't have a clear understanding how it works. Stuffs I thought about:

- "When exactly does villagers start sacrificing? I'm not seeing any villager sacrifice here."

- "Well now they do, but why only 2 corpses? What about the other villagers? Was the totem not high enough? Do they only sacrifice if totem is at top?"

- "Does villagers count have any effect? Should I kill them as soon as they spawn or should I try to keep a lot alive?"
3. Again the devour part was not clear enough, not sure when I'll win.

Thank you so much for the in depth quality feedback, this is really helpful. I pushed a new version with a hopefully better help screen. What I would like to do is only provide minimal or no instructions at the beginning, to let the players explore the mechanics on their own. The help screen is always available with ESC.

I do not like the readability of the font and will change it later, during the jam I could not find time for the change.

I will think about the questions you had while playing. I understand what you mean and can see that this is not very clear in the game.